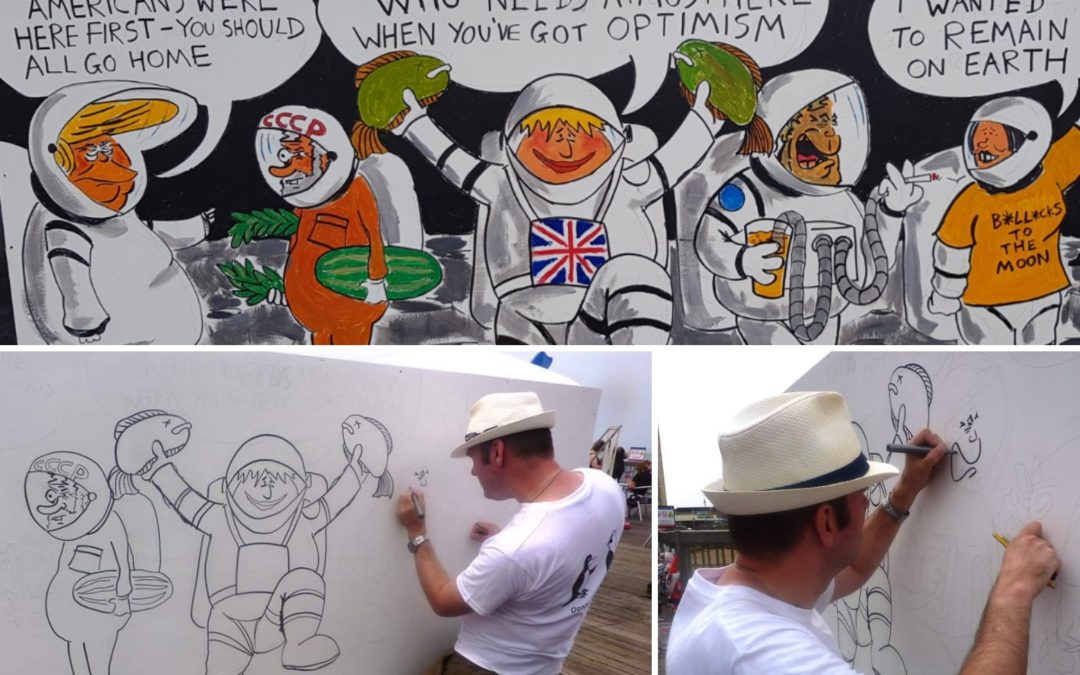 Cartoons by The Sea of Tranquillity

I was excited last year to have a cartoon exhibited in Herne Bay Cartoon Festival’s Turning the Tide exhibition. This year I was invited back, not only to exhibit multiple cartoons in the Fly Me to The Moon show, but to draw live on the pier for the first time. I thought I’d write about it.

This year the festival is themed around the 50th anniversary of the Apollo moon landing. The live weekend took place on the 3rd-4th of August and some photographic evidence is provided below, in case you weren’t there. If you did miss it, the good news is that the festival will continue to run until the 22nd of August – so if you’re in, near or travelling through the South East this summer you still have an opportunity to view some brilliant cartoons.

The festival comprises of three exhibitions and it’s own ‘fringe’ show. Fly Me to The Moon features work by over 30 members of the Professional Cartoonists’ Organisation (PCO) including a host of familiar cartoonists from the pages of The Guardian, The Independent, Private Eye and the rest of the British press.

Another exhibition, One Giant Leap includes work on loan from the British Cartoon Archive held at the University of Kent, including original cartoons and artwork from the time of the moon landing in 1969, other Apollo missions and moon related stories.

The Bookmarks exhibition is a celebration of, or commentary on, literature and the fringe offering, A Breath of Fresh Air is a look at the issue of pollution through the medium of cartoons and other art forms.

Live Pictures from the Moon

The exhibitions are fantastic, but the highlight had to be the experience of live drawing. Though I’ve visually scribed at meetings and conferences, facing the general public (an estimated footfall of 5-6 thousand during the afternoon) was a new and daunting experience.

However, it was truly enjoyable. I’m rarely present when someone opens their book, magazine, or internet browser to experience their reaction to my cartoons. To be able to hear people’s laughter (with the cartoon presumably, not at it!) was a rare treat.

As I was preoccupied with the drawing, I’d like to thank Carol Sagrott, Karol Steele, and Louisa Mellor for recording the day in photos and for your kind permission to use them here. You can find more pictures of the other cartoonists’ work (and shenanigans) from the day on the PCO site here.

Many thanks to the organisers too for inviting me to participate. If anyone needs an extra incentive to visit – as well as the cartoons pictured, I have four original ink drawings on display which you can track down and even buy(!). I hope you get to stop by.