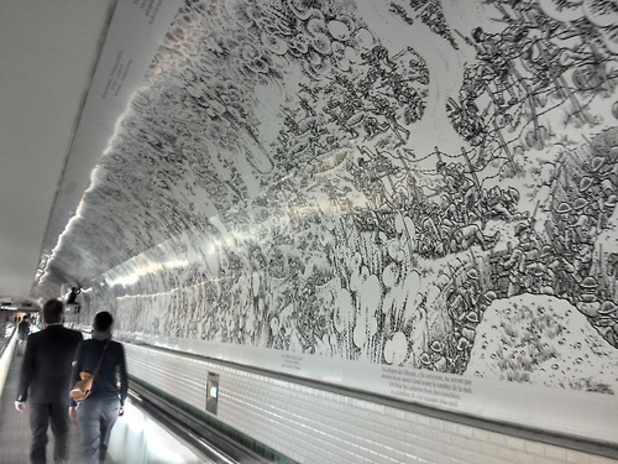 I received a copy of Joe Saccoâ€™s The Great War as a Christmas present last year.Â  Not the cheeriest of gifts to unwrap on Christmas Day, but a truly brilliant work of art and a testament to the power of cartoons.

His work, a 24 foot long panorama depicting the first day of the Battle of the Somme, is not a comic book but a single, wordless, line-drawn illustration depicting the scene.Â  The intricacy and detail, combined with the vast scale of the illustration portray the events in a way that words could not encapsulate or a photograph physically capture. 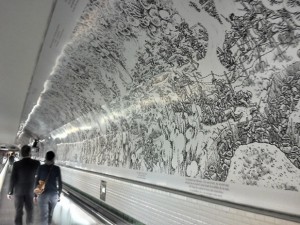 ‘The Great War’ by Joe Sacco, on display at Montparnasse metro station

As a History graduate who wrote a dissertation on the First World War, I admire the depiction of this significant battle in all its overwhelming bravery and horror.Â  As an illustrator who specialises in cartoons, I see it as a brilliant example of the flexibility of the medium.

Sacco has used cartoons as a form of journalistic reporting from both Palestine and Bosnia and this panorama has the same feel.Â  It is reminiscent of Goyaâ€™s Disasters of War, though while Goyaâ€™s illustrations from a conflict 100 years earlier were accompanied by powerfully simple captions such as â€˜I saw thisâ€™, the lack of any commentary or annotation in The Great War allows the observer to make what they will of the scene unfolding before them.

This is an uncompromising and gritty piece of art.Â  The rise in popularity of graphic novels has demonstrated that cartoons are not merely for children, but works such as this demonstrate that they can be as hard hitting and significant as any history book. 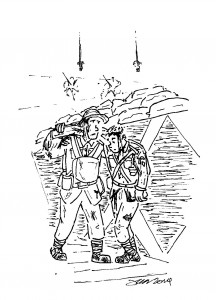 Cartoons draw peopleâ€™s attention.Â  Whether they are as stark and powerful as this piece, light-hearted methods of making a serious point, or simply for entertainment and making people laugh, people take notice.

Whatever message you might need to convey, a cartoon â€“ be it solemn, thoughtful or amusing â€“ can make your point clearly and memorably.Â  If your ideas need communicating and you appreciate the impression cartoons can make, contact JMC to discuss creating illustrations tailored specifically for you.

The importance of commemorating a battle etched into the nationâ€™s psyche may be a world away from your communications needs, but if you have the chance to read the book or happen to see the 500 foot long mural version being displayed at Montparnasse metro station in Paris from today, take the time to consider and appreciate the power of cartoon illustrations.