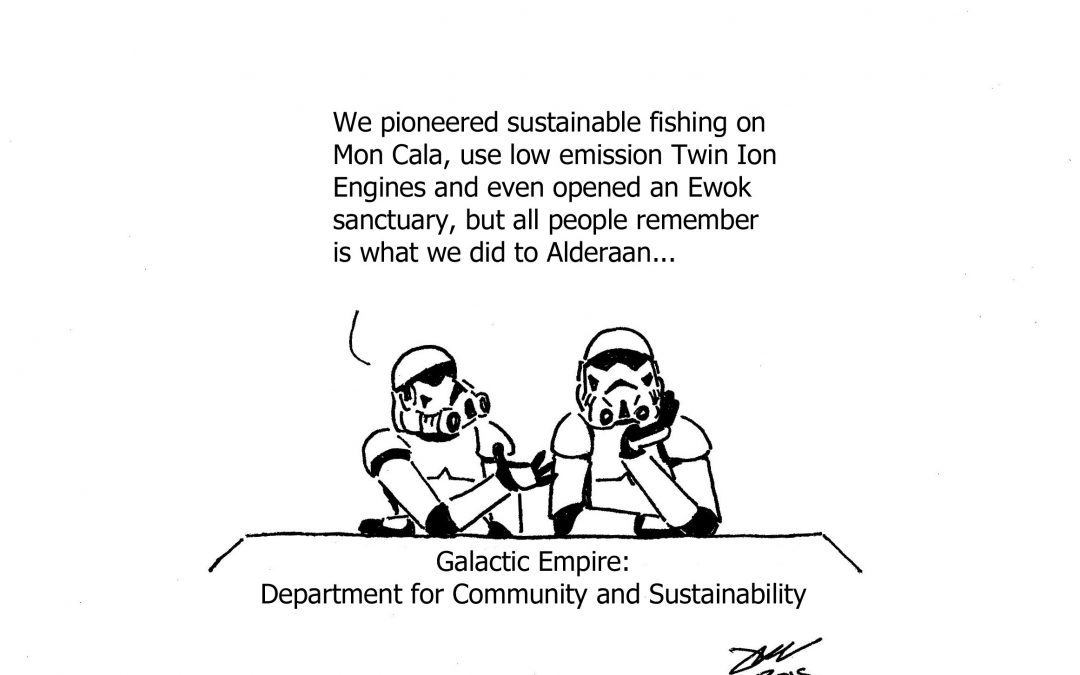 At its heart, Star Wars is a great story.  It’s a classic good versus evil tale – but it’s more than that.  Star Wars is elevated above other stories thanks to its striking visual appeal.  A great business with a great message can elevate itself into the realms of exceptional with memorable images which capture that message.

Look at the fan reaction to the new trailers for The Force Awakens.  There’s been no need for extended dialogue or detailed introductions to the plot, the audience have been thrilled by glimpses of familiar images: A lightsabre activating, an X-Wing deploying and the charred remains of Darth Vader’s mask.

Okay, you might not want your business associated with Darth Vader, but hopefully you see the point.  A single image can encapsulate a much wider message and elicited a much stronger response than a thorough explanation.

Whether you’re pursuing a content marketing strategy with the wider public or delivering an internal presentation, you’re delivering a message and that message can be conveyed more effectively by supporting it with the right images.

By ‘the right images’, I mean pictures crafted specifically for purpose.  Given the amount of time taken to compose exactly the right message for your business or organisation, to support that message with a stock cartoon found after a 20 second search of Google images doesn’t seem quite right and doesn’t work as effectively.

Illustrations and cartoons are unlimited resources – they can depict whatever you want them to (even things that don’t exist).  They can be created specifically for your message, leverage as much humour as required or be completely straight-laced.  They can be drawn specifically to tell your story, not just to sit next to it on a powerpoint slide.

Images can be inspired from anywhere, but you can always create something unique.  Star Wars takes its inspiration from Samurai films, Medieval Romances, Westerns and the Death Star attack is drawn straight from The Dambusters.  However, the resulting images were new, distinctive and now act as instant reminders of the brand.

There will be posters, trailers and features about Star Wars everywhere for the next two months.  You’ll know they’re about Star Wars without reading or listening to a word.   You’ll know because you’ll recognise the images.  When you do, think about what images can do for you.